From the ancient capital city, Beijing, to the most dynamic modern city, Shanghai, you will experience the stunning contrasts of ancient and present, tradition and modern, East and West during this Highlights of China tour. 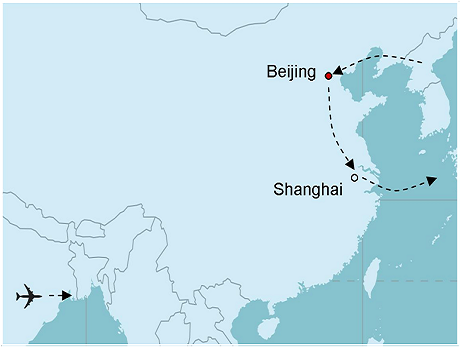 Your flight lands at Beijing, the capital of China. We are transferred to the hotel for well deserved rest and relaxation.
Day 2

Morning program begins with Tian An Men Square, the largest city square in the world. Then proceed to the Forbidden City, the residence of emperors for more than 500 years, housing numerous precious art objects. After lunch, visit the Summer Palace, a well-preserved Royal Garden of Qing Dynasty. (B,L)
Day 3

This morning start tours to the Badaling Great Wall, a symbol of the Chinese ancient civilization. The longest man-made object in the world, this 2,000-year landmark is an astonishing feat of engineering. En route visit a Jade carving factory followed by a photo-stop at the Bird Nest & Water Cube, both are the main Olympic Stadium for the 2008 Olympic Games. Optional Kung Fu Show with Peking Duck dinner US$60 per person.  (B,L)
Day 4

In the morning, visit the Temple of Heaven, the largest temple complexes in China and a paradigm of Chinese architectural balance and symbolism. After visit a Pearl factory, take a Hutong tour by rickshaw with a home visit to explore the real Beijing life style. (B,L)
Day 5

After breakfast, you’ll be free to enjoy your day in Beijing until transfer to airport for flight to Shanghai. Upon arrival, meet and transfer to hotel for rest. (B)
Day 6

Today, take a full day city tour to visit the Yu Garden, a place of peace and comfort in the heart of bustling Shanghai; the Bund, known as a miniature museum of international architecture with dozens of high buildings standing along he shore; Shanghai Museum, as one of the largest Museums in China; and Xintiandi & Pudong New Development Zone. Optional Acrobatic Show with dinner US$60 per person. (B,L)
Day 7

Today’s excursion is to the water town Suzhou. The city’s canals, stone bridges, pagodas and meticulously designed gardens have contributed to its status as one of the top tourist attraction in China. Tour to the Garden of Net Master,  the smallest but the most impressive classic garden in Suzhou. Cruise on the Grand Canal, shop at the Silk spinning factory and the Pingjiang Road Old Town Area. (B,L)
Day 8

Free until transfer to the airport for your next destination. (B)

Get our new itineray monthly